GENEVA – The partnership between the United Nations Office on Sport for Development and Peace (UNOSDP) and Inter Campus has been formalised today, three years after collaboration began in 2012. The agreement is the first of its kind to be approved by the UNOSDP within European football.

The UNOSDP works to promote sport as an innovative and effective tool to support the mission, objectives and values of the United Nations. Through sponsorship, awareness campaigns, social projects and diplomacy, the UNOSDP aims to maximise the role of sport and physical activity in creating a safer, fairer and more sustainable future.

Inter Campus uses sport to promote recreational activities and protect every child’s Right to Play. In doing so, it has been recognised as a key partner in integrating people from different ethnic and cultural backgrounds. Inter’s social project has also been praised for giving professional training to local partners and developing peace dynamics in economically and socially deprived areas.

Inter Campus has been in partnership with the UNOSDP since 2012, mainly through its participation at various editions of the Youth Leadership Programme (YLP). The YLP organises two-week camps for kids from regions afflicted by poverty and stands out for the social benefits it offers in a sporting context.

In particular, the camp help in Berlin, Germany in 2013 and the first Spanish-speaking camp in Medellin, Colombia in 2015 were both acknowledged as being an enormous success. This was in no small part down to the technical staff from Inter Campus, who shared their teaching methods with the participants during the fortnights.

Inter Campus has twice been invited by the UNOSDP to the United Nations headquarters in New York to present their own direct experience of how sport can be vital in promoting peace and development.

Today’s agreement has consolidated an already strong relationship and lays the foundations for further cooperation down the line.

‘We are honoured to formalise the long-lasting friendship between Inter Campus and UNOSDP. I remember the first time Mr Lemke visited the centre at Inter Campus Angola. He was very impressed by our work and it was a pleasure for us to host him.’ Carlotta Moratti, president of Inter Campus

‘Inter Campus is a really important partner and we are excited by the prospect of taking this collaboration to another level. The game of football – a passion for so many people regardless of their social background – is a key tool in responding to the challenges we have to face every day. Together we will use it to help young people growing up.’ Wilfried Lemke, Special Adviser to the United Nations Secretary-General on Sport for Development and Peace. 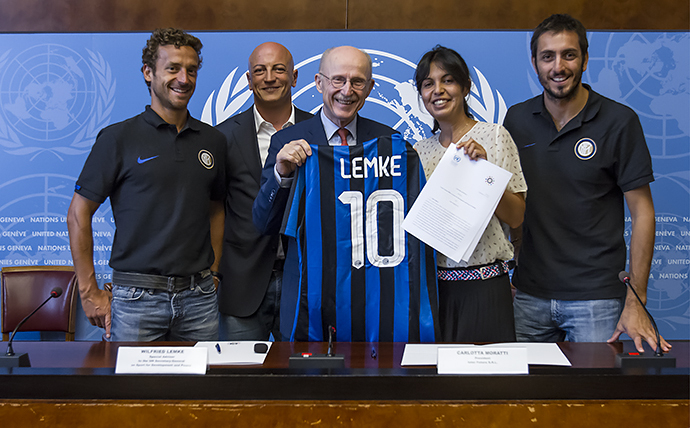