MARRAKECH – Inter Campus Morocco ended the year in style. A group of boys and girls from the local Inter Campus site in Sidi Moumen, on the outskirts of Casablanca, came to Marrakech to watch the friendly between the Nerazzurri and Paris Saint-Germain.

Before the match they had the great pleasure of meeting Roberto Mancini at the team’s base, along with the general director of UNICEF Italy Davide Usai. The children received new sports kit for the current season which they have the task and honour of delivering to the 180 boys and girls who are part of the project in a deprived area 250km from Marrakech.

The handing out of kit is a very important moment, something which occurs annually but is still very exciting for Inter Campus children all over the world. Many of the players also wanted to pose for photos with the children, leaving them with memories that will last a lifetime. Finally, it was so long until April when the Inter Campus team will travel to run their usual coaching workshop. 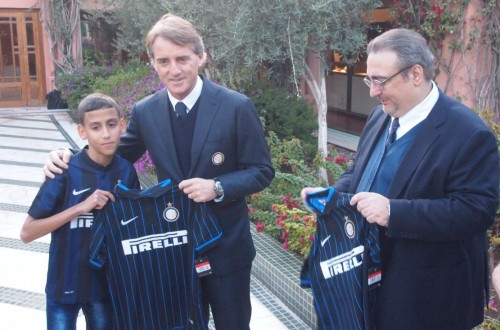 HAPPY NEW YEAR FROM THE CHILDREN OF INTER CAMPUS

MERRY CHRISTMAS FROM THE CHILDREN OF INTER CAMPUS